In light of another senseless and tragic mass shooting with too many innocent victims, please consider our superior, powerful, patented gun safety and storage device “Multiple RAC" to secure up to 3 firearms in your home, car or business.

You want to protect your family members, employees and friends !

We are all at risk to be shot unexpectedly within a moment, especially since too many firearms are not yet secured with the long lasting and extremely safe RAC weapon-storage system. 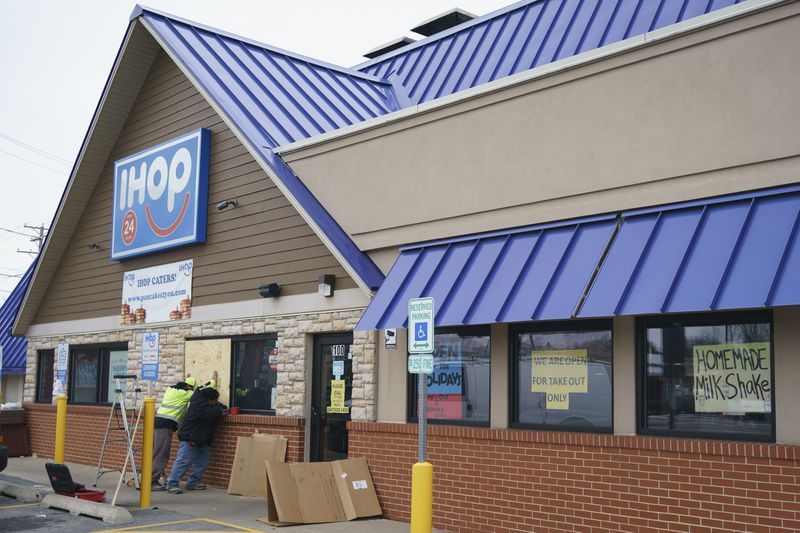 Workers board up an IHOP at the corner of Asbury and Howard following shootings that happened the day before on the Chicago-Evanston border on Jan. 10, 2021. (Youngrae Kim / Chicago Tribune)

A man suspected of killing at least three people and wounding four more “just randomly” targeted a girl of 15, an 81-year-old woman and people of different ages in between before he was killed during a shootout with Evanston police, officials said.

The man shot dead by Evanston police was identified by Chicago police Superintendent David Brown as 32-year-old Jason Nightengale, who was a suspect in three fatal shootings on Chicago’s South Side earlier in the day.

In a series of seconds-long videos posted to his personal Facebook page from Friday night on, a man displays wads of cash and alcohol in a vehicle while speaking unintelligibly to the camera. In one video, he can be heard saying, “I’m going to blow up the whole community.”

About 10:30 a.m. Sunday it appeared Facebook disabled the man’s page after many of the videos had been shared and commented on dozens of times.

Addressing reporters late Saturday, Brown explained without surveillance imaging or “a crystal ball,” police remained one step behind the shooter as he moved from the South Side to Evanston, shooting people at random along the way. There was no way to connect the shootings to one another in real-time as officers responded to each shooting scene, he said.

At one point, they believe the gunman backtracked from the fourth Chicago shooting location to the third, where he shot at police officers who were investigating the man’s earlier crime, Brown said. A police source said a marked squad car was shot at least twice and a citizen’s vehicle also was hit, but Brown said no officers were injured and none returned fire.

The Chicago shooting rampage began at 1:50 p.m. in the 5000 block of South East End Avenue in the East Hyde Park neighborhood on the South Side, when police believe Nightengale entered a garage and shot a man in the head as he sat in a vehicle, Brown told reporters. The man who died was a 30-year-old University of Chicago student, according to the school, which shared the “deeply painful news.”

“It is with great sadness that we inform our community that a current student of the University was shot and killed this evening in a parking garage of the Regents Park apartment complex at 5035 S. East End Avenue,” read an emailed statement from the school. “The University was notified at approximately 5:10 p.m. today that a student had been discovered in a car with a gunshot wound.”

A police source said the student was a resident of China who had been studying at the school. In a post on social media the University later confirmed his name was Yiran Fan and that he was a doctoral student in a joint program with the Booth School of Business and the Kenneth C. Griffin Department of Economics.

“This sudden and senseless loss of life causes us indescribable sorrow,” it said.

None of the victims had been identified by the medical examiner’s office as of Sunday morning and Chicago police said they did not have additional information or updated conditions of those who were shot.

Next, just after 2 p.m., police believe Nightengale traveled to the 4900 block of South East End Avenue, where he entered an apartment building “just randomly” and began firing shots, Brown said. He shot a door woman, 46, who was sitting at the desk in the chest, and she later died at the University of Chicago Medical Center.

A 77-year-old woman, who was getting her mail, was shot in the right side of her head and taken to the University of Chicago Medical Center in critical condition.

About 2:45 p.m., Nightengale then entered a building in the 5000 block of South East End Avenue and took the elevator to the 19th floor, Brown said. He got off the elevator and saw a man he knew because a relative of Nightengale used to live in the building.

Nightengale demanded the keys to the man’s vehicle but did not shoot him.

“He pushes that man inside and steals his red Toyota, so it’s a carjacking victim but not a shooting victim,” Brown said. Nightengale then took the red Toyota and drove away, Brown said.

After the carjacking, Nightengale entered a convenience store and announced a robbery at 3 p.m. in the 9300 block of South Halsted Street in the Brainerd neighborhood, Brown said. He then shot a 20-year-old man in the head. “Just a random victim,” Brown said.

At 4 p.m. in the 10300 block of South Halsted Street in the Washington Heights neighborhood, a 15-year-old girl was shot in the head while she was being driven by her mother, Brown said. She was taken to Comer Children’s Hospital in critical condition.

After shooting the 15-year-old girl, police believe Nightengale returned to the scene in the 9300 block of South Halsted Street and fired shots at officers investigating the scene, Brown said. He did not hit any of the officers, and officers did not return fire.

Police in both Chicago and Evanston had not made clear a motive. Brown described a chaotic scene as police rushed to the scenes of the attacks.

“We are responding to the scene as these crimes are happening, getting information, and again, he’s going to the next while we are trying to keep up with what’s happened previously,’' Brown told reporters.

“By the time we put it all together, he’s here in Evanston. All we know at this point is that there’s a Red Toyota with license plate numbers, but again, we don’t have a crystal ball, we don’t know where that red Toyota is anywhere in the city,’' Brown said. “We have no idea that he’s coming to Evanston and nor do we have any motives for any of this at this point.”

The Evanston police shooting happened near Howard Street and Western Avenue early Saturday evening immediately after the gunman “accosted” a woman shopping in a CVS and shot a woman inside a nearby restaurant, according to Evanston police chief Demetrious Cook.

“We had one of our citizens in there shopping and she was accosted by this man who fired some shots in there,” Cook said, although it seemed no one was injured in that attack. Then the man ran across the street to an IHOP, where, Cook said, “We believe in there he took a lady hostage and shot her, injuring her in a critical manner.

“And then he took off out of the IHOP and ran eastbound on Howard Street into the Dollar General lot where he was engaged by Evanston police officers and he was subsequently shot and killed,” Cook said during a news conference.

About 5:35 p.m., Evanston police responded to a call of shots fired in the CVS Pharmacy at 101 Asbury Ave., Cook told reporters near the scene. They found that shots had been fired inside, but no one was hit.

The shooting suspect then ran across the street into an IHOP, at 100 Asbury Ave., where police believe he took a woman hostage then shot her in the neck, Cook said. The woman was taken to Amita Health Saint Francis Hospital in critical condition.

He left the IHOP and ran eastbound to the Dollar General parking lot, where he exchanged gunfire with Evanston police officers, who shot and killed him, said Cook, adding authorities were investigating unsubstantiated reports that the man “may be an Evanston resident.”

“There was an exchange of gunfire. I’m not sure who fired first but it was in response to violence that he perpetrated in our town.” Cook said. “This goes to show these police officers come out here and put their life on the line every day.”

Officers were wearing body-worn cameras during the shooting and no officers were injured, officials said. Like Cook, Brown also commended the quick and decisive action taken by Evanston police.

“But for the brave conduct of Evanston police officers confronting this suspect, many more people would’ve been injured,” Brown said. “So we should take our hats off to Evanston PD.”

Chicago Tribune
CONTACT
Rosemary Sobol is an editor and reporter for the Tribune’s Crime & Justice desk. Previously, she covered crime and breaking news at the Sun-Times and the City News Bureau of Chicago. An alumna of Loyola University of Chicago, Rose is a music lover and runner.

Chicago Tribune
CONTACT
Paige Fry is an overnight crime reporter for the Chicago Tribune. She graduated from the University of Florida, where she was the editor-in-chief of the student-run paper The Independent Florida Alligator. She has also previously written for the Tampa Bay Times, The Palm Beach Post and The Gainesville Sun.

Chicago Tribune
CONTACT
Alice Yin works the overnight shift at the Tribune, responsible for covering whatever breaks. She is a Medill School of Journalism graduate and was a statehouse reporter for the Associated Press in Michigan before being hired last summer by the Sun-Times. Alice likes to explore new restaurants, go jogging and frequent bookshops.

Chicago Tribune
CONTACT
This Quick Response Team reporter has edited and reported in California, Texas and Florida during a nearly 20-year-long career focusing on crime and breaking news. She joined the Trib in 2016 after returning to her hometown of Crystal Lake with her husband and their twins.